In a previous age of the world (2011), I built myself a ribbon controller.  I used it to drive my Korg Mono/Poly via CV.  And it was good.  But, that was before "synthhacker" first awoke under the stars on the shores of Cuivienen.  Has its glory been forever lost?  No!  The ribbon lives again!  And it has been updated!  Behold:


The Overall Setup:  This ribbon is just a controller -- it controls a synthesizer.  It doesn't make noise itself.  Those black-and-white keys that are built into the synthesizer are also just a controller.  They tell the brain of the synth to make noise at fixed pitches.  My ribbon controller uses the synth's MIDI interface to tell the synth to make noise across a continuous spectrum of pitches.  More bendy.  More swoopy.  Fun!  My controller has two parts: the ribbon itself, and some electronics (Arduino +  MIDI Shield) to do the ribbon-to-MIDI conversion. 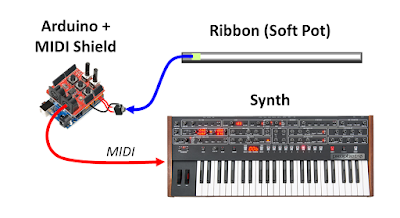 The Ribbon Parts:  The ribbon itself, I built a long time ago.  But, as stores on the internet never forget what you've ordered, I easily went back and looked it up.  The core of the ribbon controller is a 500mm-long "soft pot" (Sparkfun).  This is the part that senses where you touch.  Since it is soft and floppy, however, I also bought a 2-ft long strip of plastic (McMaster) to act as a backbone.  For the electrical connection to the ribbon, I used a headphone jack (Sparkfun) and a small perfboard (Sparkfun).  The only real innovation with my ribbon controller (there are lots of DIY ribbons out there) is that I also added a magnetic strip along its back (McMaster).  Since most of my synths  have a metal front panel, the magnetic strip is a great way of keeping the ribbon in place!

Assembling the Ribbon:  I started with the plastic strip.  Its edges were surprisingly shart, so I got out some sandpaper to smooth the edges.  Now it's much nicer to touch.  After cleaning off the sandy bits, I spray-painted the whole thing black.  When fully dry, I attached the magnetic strip and the soft pot, both via their adhesive backing.  Then, I carefully soldered the ribbon's terminals (don't melt the soft pot!) to the perfboard and then to the audio connector.  I wired the connector so that the "top" of the pot was to the tip, "bottom" of the pot was to the sleeve, and the "wiper" of the pot was to the ring.  Once it was all soldered together, I epoxied the perfboard to the plastic strip to make it all nice and solid.


Arduino-MIDI Electronics:  The ribbon is just a potentiometer -- it needs electronics to interface to a MIDI synth.  After my previous project making an MIDI-to-trigger converter, I realized that I could re-use that exact same hardware for this ribbon-to-MIDI converter.  Repeating the recipe list from that project, my parts include an Arduino Uno, a MIDI Shield* from Sparkfun, some stackable headers, and a 3.5 mm stereo headphone jack (or maybe one like this).

(* Note: I used the old Sparkfun MIDI Shield but, presumably, the new model linked above works well, too).


Assembling the Electronics:  I soldered together the MIDI shield, including soldering on the stackable headers.  I then soldered some wires to the audio jack and soldered those wires (being sneaky) to the header pins sticking down from the MIDI shield (detailed soldering pics here).  Once it was all assembled, I connected the ribbon to the MIDI shield using a standard 3.5 mm audio cable.  I also connected a USB cable to my laptop so that I could power it and program it.  The photo below also shows the MIDI cable connected, but we're not quite ready for that, yet.

The Ribbon is a Potentiometer:  Touching the ribbon (the "soft pot") is like turning the knob on a potentiometer to a particular spot.  If I touch it near the low end, it'll show a low resistance.  If I touch it near the high end, it'll have a high resistance.  The job of the Arduino, therefore, is to sense the resistance of the ribbon so that it knows what note to play.  In theory, pretty easy.  But, to get some details on how this works, I hooked used my setup to collect some actual data.

The Ribbon's Response via Arduino:  To measure the response of the ribbon with an Arduino, I used the setup described above, which has the wiper of the pot connected to one of the Arduino's analog input pins (A3).  The bottom of the pot is tied to ground.  I activated the input pin's pullup resistor (via pinMode(A3, INPUT_PULLUP)) and started reading ribbon values via AnalogRead(A3).  I printed the values to the serial port so that I could see them on the P and log them to a file.  Sliding my finger to different octave points on the ribbon, I made the plot below,

Values When Touching the Ribbon:  The middle of the graph shows the values when I touch the ribbon between its bottom (C1) and its top (C4), Looking at the detailed values, the lowest value seen in my ribbon (C1) is about 12 whereas the highest value (C4) is about 339.  So, I know that I have to program the Arduino to map values between 13-339 to musical notes between C1-C4.

Software:  After seeing how the ribbon responds, I wrote my Arduino software.  It's basically a big loop that reads the ribbon value, converts it to a MIDI note number, and sends those MIDI commands to my synth.  While it seems conceptually simple to do an AnalogRead() for the ribbon followed by a Serial.write() to send the corresponding MIDI message, it does actually take some thought to get it to respond the way that you'd like.  Also, to make the ribbon pitches change continuously (and not be quantized like with the piano keys), you need to compute and transmit all the pitch bend commands.  It takes some work to get it right.  If you're interested, my Arduino code is available on my GitHub here.

Linearizing the Response:  One tricky spot is if you want the pitch to track linearly with your finger position on the ribbon.  In my case, I found that the notes were too closely-spaced at the top of the ribbon and too widely-spaced at the bottom.  I didn't like that.  The key to linearizing the response is to recognize that the ribbon and the Arduino's pull-up resistor actually form a voltage divider.  Once you do the math on that voltage divider, you program the Arduino to better deduce the note you want given the apparent voltage at the soft pot's wiper.  It's not perfect, but it's much better than before.


Bend Range:  The ribbon is fun because you can use your finger to sweep through all the pitches in between the normal notes.  Since the MIDI messages assume a piano-like keyboard, you do these "in between" pitches by commanding a note to one of the standard pitches followed by commanding a pitch bend to get the in-between pitch that you actually want.  Ideally, you could set the synth so that its allowable amount of bend would span the whole ribbon.  Unfortunately, on the Prophet 6, the max bend amount is +/- 1 octave.  As a result, with my setup, I get a brief note discontinuity when I try to continuously slide across more than 1 octave.  This is a limitation of the synth, not my ribbon controller. (If the synth's software were open source, I could fix that!)

Wobbling Pitch (ie, Pitch "Noise"):  Another subtlety that I uncovered is related to the fact that one's ear is very sensitive to changes in pitch.  The issue is that any noise in the measurement of the ribbon value will directly translate into wobble (instability) in the pitch commands sent to the synth.  When I was powering my system from the laptop and when the laptop was running on battery, my system sounded great.  But, when I plugged the computer into AC power, the pitch wobbled a lot.  It was quite unpleasant.  My solution was to add a 33 nF capacitor between the ribbon's analog input pin and ground and to add some filtering in software (revised code is here).

Future Work:  It's pretty fun to have my ribbon controller working with my MIDI synth.  Sure, I don't like that there is still a note discontinuity that happens when I try to exceed the 12-step max bend allowed by the Prophet 6, but it's still quite fun.  (Maybe I can sweet talk someone at Dave Smith Instruments to help me out on that one remaining issue :).  Looking for other ways to improve the ribbon, I'm considering adding a DAC so that the the Arduino (or Teensy!) can directly create its own audio without needing to command an external synthesizer.  That'd be fun.  How about a ribbon wavetable synth!  Or, how about a ribbon FM synth?  Fun!

Follow-Up:  I also made a version of this ribbon that outputs CV signals.  Now it can drive my old pre-MIDI synths like my Korg Mono/Poly.  Check it out here!