Inspired by Adafruit's Electronic Halloween, and in particular Becky Sterns "Space Face" and "Firewalker LED Sneakers", I decided that I had to make something light up this Halloween (and maybe wear some make-up, too).  Here's what I came up with:


While the video above simply has the LEDs oozing through the rainbow colors (straight out of Adafruit's example code for the LED strip), my hat was also equipped with a bunch of sensors to allow it to respond to the world around it.  Check out the two other operating modes below:

So, you can count me as one of the multitudes of folks adding LEDs to hats for good fun at parties!  It may be simple, but it's SO MUCH FUN!

Interested in making your own world-responding LED hat?  Well, below are a couple pictures showing some details on how I put it together. 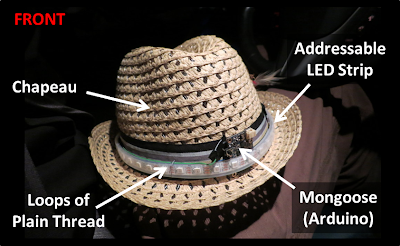 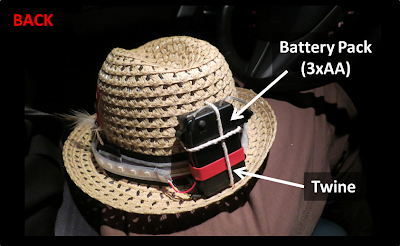 And my shopping list was:
The most expensive thing on my list is the Mongoose.  I happened to have one that I harvested from an old project.  It's nice and small and has all those cool sensors...but it's pricey.  If you don't want to spend the money for that, you could use a regular Arduino.  That will let you do pre-programmed LED effects (like the rainbow effect shown in the first video).  And that would be totally cool just by itself.  If you do want to add the ability to be sensitive to motion (like I did), you can still avoid the Mongoose by using a regular Arduino paired with one of those accelerometer / magnetometer combo sensors.  You could try this one from Adafruit.  I think that would work just fine.

One of the hardest parts for me was figuring out how to attach it all to the hat.  So, on my wife's very good suggestion, I used a little twine to tie the battery pack through the holes in the wicker hat and loops of thread to "sew" the LED strip to the hat at select locations.  Easy!  And, it was surprisingly effective.  (Maybe that's because my wife also helped greatly in actually doing the attaching!)

So, that's my story.  It was a great hat.  It was also (for me) a fun make up job.  Another set of thanks go to my talented make-up artist, Ange! 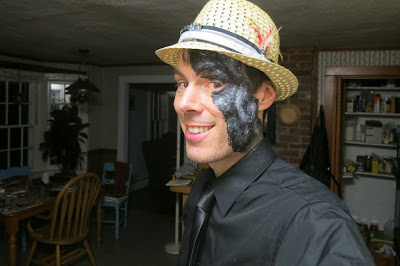