Following from this post, which discussed mods to bypass or remove the post-effects VCF, some folks listening to by demos have commented that the modified sound is perhaps too bright or too raspy.  That's a fair criticism.  Because we've removed the post-effects VCF, perhaps it's also time to consider removing circuit modifications introduced by Korg itself into the Polysix design to try to boost the high-frequencies that had been lost in that filter.  If we eliminate the "illness" (ie, the overly-mellow sound caused by the post-effects VCF), maybe we should eliminate the "cure", too.  That might remove the excess raspiness.

First, let's start with the quote from the Service Manual (see item 4):


Intrigued by item (4), I went to the schematic and found that all of these components are around the last VCA at the end of the KLM-368 "Effects" PCB.  An excerpt of the schematic is below. 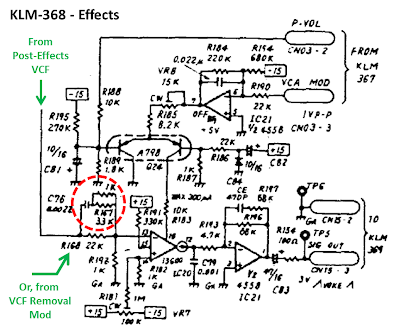 Looking at this circuit, what immediately caught my eye were the elements that I circled in red.  Normally, an LM13600-based VCA would be fed the input signal via a simple resistor like the R168 (22K).  Note that Korg has added a parallel path through the C76 cap followed by the pair of resistors.  What this allows is for high-frequencies (which will pass through the cap) to go around the relatively large 22K resistor and get to the LM13600 VCA via 1K resistor.  This boosts the treble.  And given how small that C76 cap is, it's going to boost only the highest of frequencies (the raspy ones). 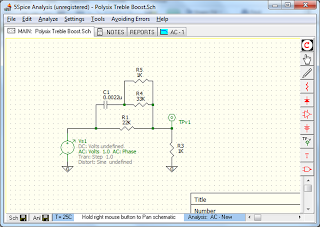 The red line is the circuit as it appears in the schematic.  Above 3.5 kHz, the treble response just goes higher and higher.  The black line is when I remove the upper 1K resistor.  Because the capacitor is still in the circuit (because of the 33K resistor), there is still 3 dB of boost to the treble.  But, the boost to the highest, raspiest frequencies is eliminated.  At 10 kHz, for example, removing that 1K resistor drops the response by 6 dB.  That could be just the thing to take the raspy edge off the sound.

Because I happen to like the very bright sound of my Polysix, I did not snip out the 1K resistor to try to tame these frequencies.  Therefore, I have no audio comparison to demonstrate the effect.  Sorry.  If you try this mod, be sure to let me know how it goes!