In this previous post, I measured the temperature of my Korg Polysix because I was worried that my modifications were drawing too much power and possibly over-taxing the power supply.  Without a similar measurement on an unmodified Polysix, I couldn't know whether the value that I measured was normal or abnormal.  Well, I decided that I could approximate an unmodified Polysix by disconnecting my mods and repeating my test.  Here are the results (F on top, C on bottom): 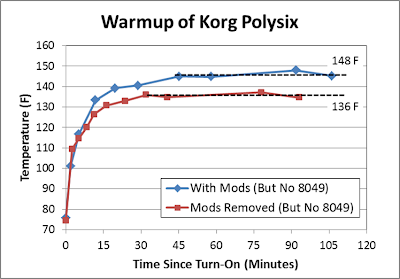 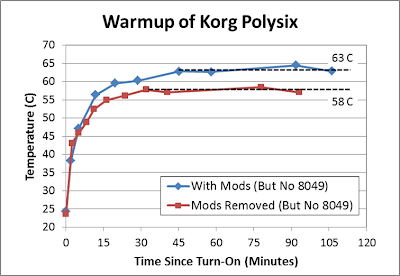 To define my test a little more specifically, I measured the temperature of the metal bar acting as a thermal bus for the linear regulators in the power supply.  I measured the temperature mid-way between the 3rd and 4th regulators (see picture below), which was the hottest spot for my modified Polysix.  I did the test on two sequential days with the initial temperature being 75.7 F for the test of the modified synth and 74.4 F for the de-modified synth. 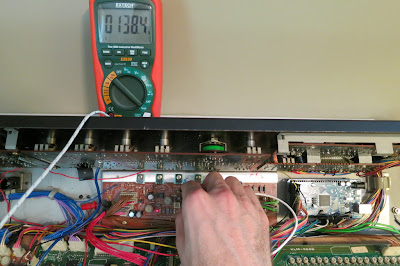 For the "modified" synth, the relevant changes are: (1) the removal of the Polysix's 8049 microprocessor that had been the key assigner, (2) the addition of a key scanning microprocessor from Keyparts UK (measured as 55.3 mA from 5V), and (3) the addition of an Arduino Mega to do all the key assigner functions (measured as 58.3 mA from 5V).  When testing in the "de-modified" condition, I disconnected the key scanner and the Arduino.  I could not, however, put the 8049 back into the synth.  Therefore, the "de-modified" condition under-represents the temperature of a stock Polysix.

OK, now I can finally answer the question as to whether my mods are putting my power supply at risk.  My modified Polysix reaches 148F.  Compare this to my estimate of the temperature of a stock Polysix, which is about 140F.  That's a reasonably big difference in temperature.  While maybe this difference is OK, I should probably not add any more components that would further increase the power draw.

For example, I have this idea of adding wavetable oscillators to the Polysix.  If I do this using six discrete Femtoduino microcontrollers, this would probably require ~120 mA from 5V, which would be 600 mW.  Adding this to my already-modified synth would result in a final temperature around 156 F (69C).  Now, if I were to play this synth in a hot room (85F) instead of at cool conditions of my test (75F), that would mean that my power supply would be running at 156F + (85F - 75F) = 166 F (74 C).  That's got to be too hot.  My conclusion is that, if I want to add these components, it looks like I'll have to add my own power supply.