After my long string of modifications to my Korg Polysix, I've now got several additional electronic components drawing power from the Polysix's built-in power supply.  I've been worried that I might be taxing the power supply too much.  Feeding this fear is that, when I touch the back of the Polysix, it seems awfully hot.  Since I don't have an unmodified Polysix to compare to, all I can do is take some measurements and see if anyone out there on the Internet can confirm if my readings are normal, or if they're too hot.  Does my Polysix have a fever?

To measure its temperature, I'm using the thermocouple that came with my digital multimeter.  It's a hot day here in the Northeastern United States, so as you can see below, the ambient temperature is 86.4 F (30 C). 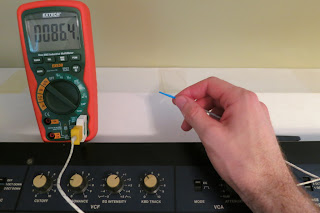 After playing my modified Polysix for about 30 minutes, the picture below shows that the back surface of the Polysix is reading almost 109 F (43 C).  It is quite warm to the touch. 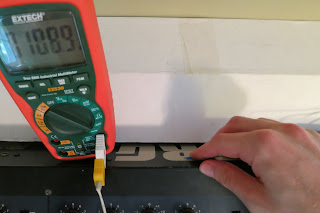 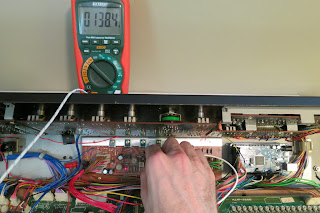 While I had the synth opened up, I also measured the temperature of the transformer.  it was reading 123.5 F (51 C).  While that's really warm, it could certainly be worse. 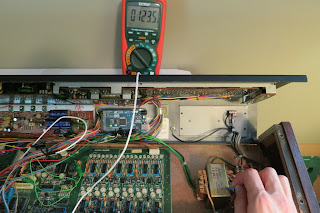 So, my question for all of you is whether you think that 140 F (60 C) is too hot for the power supply.  Am I over-taxing the power supply?  What is the temperature shown by an unmodified Polysix?

To be truthful, I'm actually interested in drawing even more power from the built-in power supply.  My mind is currently dreaming of 6 Arduino Micros (or 6 Femtoduinos) to add a second oscillator to each voice*.  I'd like to use the built-in power supply to power these additional units.  If my existing modifications are already causing this much additional heating, I'm thinking that it would be unsafe for me to draw even more power.  Thoughts?

(* Yes, I could use a single microcontroller to create all six new voices, but I want to do the six voices as wavetable oscillators where the sample rate changes to effect the desired pitch.  Since the sample rate will be driven by an internal timer interrupt, and since I don't want the 6 different timers conflicting with each other, I think that I need 6 separate microcontrollers.  That's a lot of additional power draw.)

Update: Here I compare the temperature to my de-modified Polysix.
Posted by Chip at 6:37 PM