Previously, I modified my Korg Polysix to remove the post-effects VCF.  To my ears, this mod nicely opened up the sound of the synth.  Others, though, thought that it now sounded too "raspy", which might be a way of saying that it now had too much treble.  That's a fair criticism.  In this post, I discussed how the Polysix has a built-in treble boosting circuit to partially compensate for its previous lack of treble.  Since my modifications to the post-effects VCF  restored some of the synth's treble deficiencies, the treble boost circuit might now be over-compensating.  Today, I discuss how I modified this circuit (in particular, around R168) to try to flatten its treble response.  As usual, let's first jump to the end of the story...here are some audio demos illustrating the effect of the mod to flatten the response.

Korg's built-in treble boost is on the KLM-368 Effects PCB.  An excerpt of this part of the schematic is shown below.  Looking at the schmatic, one can see the main part of the audio signal passes through R168, where it is attenuated as a voltage divider with the 1K resistor to ground.  In parallel with this main path, the elements circled in blue provide a second path for the higher frequencies, which means that the treble passes through with less attenuation than the lower frequencies.  By being attenuated less, the result is that the treble frequencies appear to be boosted relative to the lower frequencies.  In my most recent frequency response measurements of my Polysix, I saw that the boost starts around 2 kHz and peaks around 12 kHz.  At the peak, the boost is about 4-5 dB.  For a vintage synth, 12 kHz is very high pitched...it is basically just the "sizzle".  When boosting the sizzle by 4-5 dB, some ears might indeed find the new sound to be a bit obnoxious. 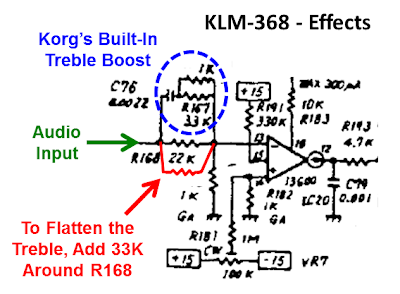 So, I looked at ways to flatten the treble response to reduce any obnoxiousness.  The most obvious modification would be to simply remove the elements circled in blue.  Unfortunately, that does not work well because some treble boost is needed to compensate for treble loss elsewhere in the system.  So, if we want to flatten the response, we need to adjust -- but not eliminate-- the treble boost of this circuit.

Implementing the modification is pretty straight-forward...just add a 33K resistor across the existing 22K R168 resistor.  Unfortunately, because of my modification to remove the post-Effects VCF, I already have a jumper wire flying into one leg of R168.  You can see what I did in the picture below.  The blue resistor is the newly-added 33K.  Below it, and slightly behind it, the tan resistor is R168.  You can see that I curved the leg of the blue resistor in a funny way so that it stuck out before looping back and connecting to the leg of R168.  Because of the perspective, you cannot see it loop back to connect to R168.  I then connected the yellow wire (my jumper wire going around the post-Effects VCF) to the looping leg of the blue wire.  Done.  Note that the green capacitor has not been touched in this modification.  The angle of my photograph may look like it is connected to my modification, but it is not...it is just unfortunately aligned in the background.

After doing this modification, I re-measured the frequency response of the synth (using the Maximum Length Sequence technique discussed here).  A comparison of the original and modified response is shown in the graph below.  As you can see, adding the 33K resistor did indeed boost the response through the low and mid frequencies.  The relative weighting of the high treble to the rest of the tone is now more balanced. 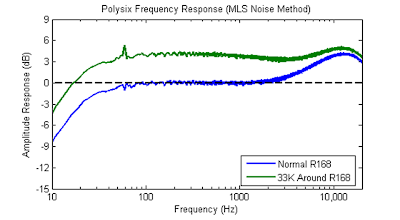 A side-effect of this mod is that the signal level is overall about 3-4 dB hotter going into the IC20.  For the loudest sounds, this might cause it to saturate a bit...for it to add a little compression or distortion.  I'll be keeping my ear tuned for that possibility.  Since Moog, with their Sub Phatty, has been extoling the virtues of adding a little OTA distortion, maybe any slight overdrive added here would be a good thing.  I'm not convinced either way, but I will keep my ear open for it.

So how does it sound?  Well, the sound samples at the top provide a comparison.  These are recordings straight from the synth to my M-Audio Microtrack.  Because the modified version was 3-4 dB louder, and since we humans are very sensitive to (and partial to) louder sounds, I cut the volume of the samples from the modified synth by 3.2 dB to equalize their RMS power.  So, even though I did not equalize their volumes on an A-weighted scale, hopefully I'm close enough that it is a fair comparison.

Do you think that the treble-flattening modification sounds better?  Or does it sound too dull?  I'm curious to hear your thoughts!

Follow-Up: I had this mod in my synth for a couple weeks.  I decided that I preferred the super-sizzly sound that I had before, so I removed the 33K resistor.
Posted by Chip at 10:37 AM