Killing and Reviving my Polysix (Replacing a Dead IC)

So far, I've been pretty successfull with hacking aftertouch, portamento, and detuning into my Korg Polysix .  My next big goal is the addition of velocity sensitivity, which requires me to better understand the VCF control circuitry on KLM-366.  Well, in probing the clock signals for the VCF multiplexing, I killed my Polysix!  This is the story of how I brought her back to the land of the living.

How Did I Kill It?  This all started when I was probing around the part of the KLM-366 board that processes the VCF EG signal for each voice.  Specifically, I was exploring the time-division multiplexing of the VCF EG through IC24 and IC23 .  This multiplexing is all kept in sync via clock signals "A", "B", "C", and "INH" that are generated from IC11 and IC12 (schematic below).  In probing IC12, I accidentally shorted one of the pins on IC12 (likely pin 11), which apparently killed it.  As you can see in the pictures above, the "B" signal is clearly bad (it is supposed to be a square wave pulse). 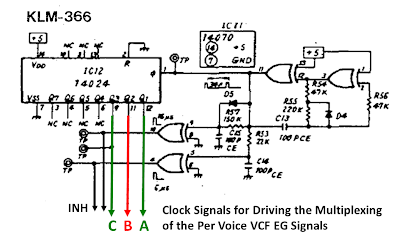 How Do I Fix It?  Replacing IC12 seemed like the only reasonable answer.  The chip itself is really cheap (68 cents).  The hardest part in replacing the IC is disassembling the synth so that I can get good access to the circuit board.  I don't like taking it apart because it gives me too many opportunities to loose screws and to re-connect connectors in the wrong place and stupid stuff like that.  But, in this case, I think that it needs to be done.

Shopping List:  The only part that I really needed was a replacement 14024 chip.  Like usual, I got it from Digikey.  The specific part that I bought was MC14024BCPGOS-ND.  I chose this part because (I think) it is the only through-hole version of the 14024 that they sell.  At 68 cents, I bought 2, just in case I damaged one during my installation.  Also, following the advice from The Old Crow, I decided to install an IC socket at IC12 in order to ease any future replacement of this chip. There are tons of choices for sockets.  Never buy the cheapest ones.  I liked the look of A32869-ND.  Even though it was only 78 cents, it seemed to be one of the higher end models.  Cool.

Removing the Dead IC.  The replacement process starts by removing the dead chip.  Some helpful folks at my workplace suggested that removing an IC is best done by first snipping off each of its legs so that the body of the IC just falls free of the PCB.  Then, as long as you snipped the legs high enough away from the board, there's plenty of leg left to grab with your pliers so that you can apply a little heat and lift each leg out one-by-one.  Pretty easy.

Removing the Old Solder:  Even after removing the IC's legs, there was lots of old solder that is plugging the holes in the PCB.  In order to get the new IC socket into all those holes, it's usually best to remove that old solder.  There are a few ways that you can do this -- solder wick and a solder pump being the two most common.  Clearing plugged through-holes is a perfect task for a solder pump.  With a solder pump, you first apply your soldering iron to the hole until the solder melts.  Then, you quickly put the spring-loaded solder pump over the hole and, while the solder is still melted, you hit the release button.  BANG!  The pump pops open and (hopefully) sucks out the liquid solder.  Because I'm new to this, I usually had to try 3-4 times before I got the solder out.  As you can see below, the holes looked fairly clear when I was done.

Installing the IC Socket:  At this point, I was able to insert my new IC socket into the holes in the PCB (see below).  It fit pretty nicely.  Now I just needed to solder it in.  Unfortunately, one really needs access to the bottom of the PCB to do this, which means the synth needs to be partly disassembled.  So, I removed the keybed, I removed the rail holding down the PCBs, and I unscrewed all the screws holding down the PCB.  I then removed a few (but not all!) of the multi-pin connectors so that I could tip up the PCB and get access to the bottom (see pic below...the power drill is holding the PCB upright).   Once I was able to access the bottom of the PCB, I was soldered the legs of the IC socket to the PCB.  We're cooking right along now!  Smell the solder!

Finishing Up:  Once the socket was soldered in, I layed the PCB back down and I inserted the replacement 14024 IC into the new socket (see pic below).  I then re-attached all the connectors that I had undone, I double checked that I re-connected everything correctly, and I turned on the power.  With the oscilloscope, I checked the "A", "B", and "C" clock signals being generated by the new 14024 (see pic below).  Everything seems to work!

Oh, The Joy:  With the circuit looking like it's working again, I re-attached the keybed, closed the lid, and fired her up.  Here's my little jam of joy...the playing is crappy, but it's so good to hear her voice again.


Next Step: Tipping over the capacitors so that the keybed fits properly
Posted by Chip at 9:31 AM