I recently modified my Korg Polysix to have velocity sensitivity.  Now that it is responsive to the dynamics in my playing, my Polysix makes much more convincing electric piano and clav sounds.  The problem, however, is that those classic EP and clav riffs from the classic records from the 70s were often played through a guitar amp, which means that we're used to hearing them with the warm compression and light overdrive of tube guitar amps.  By comparison, the EP and clav sounds from my Polysix are too clean and too dynamic.  In this post, I start the process of finding the right "drive" mod to bring some of that compression and overdrive to my Polysix.  I'm going to start with some simple diode-based distortion.


Classic Diode Distortion:  Being a guitarist, I know that it is very difficult to simulate the sound and feel of a tube amp.  So, instead of heading down that challenging path, I'll look to the well-known overdrive and distortion tricks used in guitar pedals.  A very common technique used for guitar distortion is to use a pair of opposite-facing diodes in parallel.  This is how distortion pedals such as the Ibanez Tubescreamer and the ProCo Rat achieve their classic sounds.  Maybe it'll work well in my Polysix, too!

Putting Diodes in the Polysix:  Below is an excerpt from the Polysix schematic.  It shows the last VCA and the last amplifier prior to the audio signal being sent to the output jack.  In the blue region, it shows that the make-up gain after the VCA is simply an op-amp configured as an inverting amplifier.  Since the Tubescreamer also uses an inverting op-amp, I chose to follow the Tubescreamer's distortion approach of adding a pair of diodes into the op-amp's feedback loop.  I just need to clip in a pair of diodes?  That's it?  Easy.


In Parallel with R196:  In the modified schematic above, you can see that the pair of diodes are added in parallel with the other elements in the feedback loop.  To enable a quick test, I simply attached the diodes using clip leads on either end of R196.  The other ends of the clip leads (not shown) are clipped onto the diodes.  The only tricky part is to make sure that the diodes face in opposite direction.  I used my handheld multi-meter to determine which direction was "forward" for each diode, and then I swapped one of them around backwards.


Looking at the Output:  With the diodes hooked up, I used my oscilloscope to look at how the diodes affected the audio signal from the op-amp.  The pictures below show some screenshots from the oscilloscope.  To make a strong signal, I set the Polysix to play two voices at the same pitch.  Then, I set the Polysix's "Attenuator" dial to maximum volume (ie, "+10dB").  Now the signal is strong enough to really show the effect of the diodes.


Clipping of the Waveform:  As can be seen in the top-left screenshot ("No Mods"), I've got a normal-looking sawtooth waveform.  When I add just the LED, I see that the top of each sawtooth has been clipped to a maximum voltage of 1.6V (ie, the LED's forward voltage drop).  When I swap out the LED for a backwards silicon diode, it's the bottom of the sawtooth that has been limited (clipped at 0.6V, which is the diode's forward voltage drop).  Finally, when I have both the red LED with the backwards silicon diode in circuit, both the top and bottom of the waveform is clipped.  So, the diodes act to distort the signal by limiting its dynamic range.  Pretty sensible.


Not What I Wanted:  By the end, my conclusion was that I didn't like the results.  My first reaction was that the distortion was too fizzy/fuzzy.  But, beyond just the fizzy sound, the diode distortion didn't have the right feel when playing it.  I had been hoping that the distortion would provide a sense of dynamic compression, like a guitar amp feels.  But, instead of feeling that kind of compression, I actually felt like the signal was being hard limited...which, of course, is exactly what diodes do.  I should not have been surprised at this disappointment.

Moving Forward:  Yes, I could have spent more time refining this diode distortion modification to try to address my criticisms.  For example, to reduce the fizzy/fuzzy sound, the Tubescreamer includes additional capacitors to reduce the high frequency sizzle.  I could have tried that.  But, in truth, this experiment reminded me of why I don't use diode-based distortion pedals with my guitar...I never end up liking the sound.  So, for my Polysix, I'm going to leave behind the diodes and try some other approaches.  Let the synth hacking continue!

Update: I've removed the diode distortion and, instead, modded the Polysix to overdrive one of its OTAs.  I like that sound much better!

In truth, a Korg Polysix has rather limited features.  But, because it is an analog synth, it is open to modifications.  And so I've dived in head first.  I've already added aftertouch and portamento, controllable detuning, sustain pedal, and Moog-style legato triggering.  My most recent modifications began a few weeks ago, when I decided that I wanted my Polysix be velocity sensitive.  After a bunch of explorations and trials, I've finally pulled together all of the pieces.  That's today's story.  But first, here's a demo!  (Note, the bass distorts my laptop speakers, too.  Go for headphones.)


The Pieces:  The addition of velocity sensitivity to my Polysix builds upon many of the previous mods that I've done.  The core enabler of this mod was the fact that I had already replaced the stock Polysix keybed (which does not transmit velocity information) with a new Fatar keybed that is both velocity and aftertouch sensitive.  It's sweet.  As shown below, in my modified Polysix, the data from the new keybed is fed to an Arduino Mega, which assigns each new note to one of the six voices in the Polysix.  To modulate that voice in response to the note's velocity, I also feed the velocity information to my new "Velocity Processor", which then does the actual velocity-based modulation.


Velocity-Based Modulation:  So what kind of velocity sensitivity did I implement?  I chose to modulate the intensity of the filter envelope.  As you heard in the demo, the intensity of the filter opening and closing gives a strong sense of articulation and dynamics.  In a stock Polysix, the intensity is the same for all voices (as set by the "EG Int" knob).  My goal was to dynamically change the envelope intensity based on how hard I hit the key.  As shown below, I chose to attenuate the filter envelope based on the note velocity.  At maximum velocity (MIDI 127), the envelope would be at its full intensity (as set by the "EG Int" knob, as before).  At lower velocity values, the intensity would be progressively smaller.  As a result, notes that I press hard should have a strong intensity and notes that I press lightly will soft intensity.

Hardware Approach: After studying the Polysix schematic, and after figuring out how the VCF envelope multiplexing and how its associated addressing and synchronization works, I settled on the plan that I would manipulate the VCF envelopes in the multiplexed portion of its circuit.  Being multiplexed, I only have one signal line to manipulate, instead of six individual signals (one for each voice).  Sure, the signal on that one multiplexed line is changing very quickly (all six envelopes are time-sliced onto a single line), but I've already proved that a Teensy 3.1 plus a digital potentiometer can keep up just fine.  So, my hardware plan was settled -- I'd insert my Velcoity Processor right after the VCF Multiplexer (IC24) on the Polysix's KLM-366 PCB. 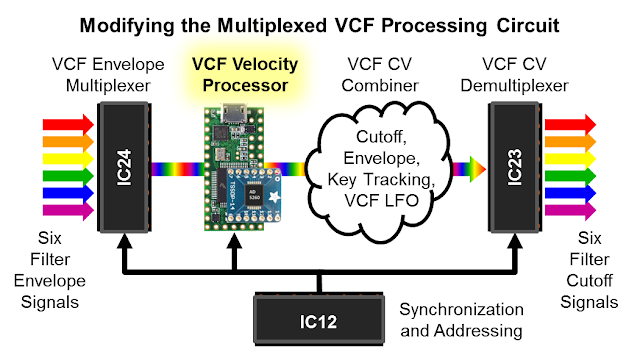 Building It:  In the Polysix, I was happy to see that IC24 is socketed, which means that you can pull out the chip and insert all sorts of fun new circuitry via the now-empty socket.  And so that's exactly what I did.  I took a piece of protoboard, soldered on the Teensy 3.1, the digipot, and IC24 itself.  More details on the build are here.  I then inserted the assembled protoboard into the empty IC24 socket.  As you can see below, it's not too pretty.  It's not complicated, it's just messy.  Someone with more experience would certainly do this more cleanly.


Arduino and Teensy Software:  Hardware alone does not make this modification work.  I also needed to write some software.  For example, I needed to program the Teensy (my "Velocity Processor") to keep up with the multiplexing circuitry and to drive the digipot to properly attenuate the envelope signal.  I also needed to expand the programming on the Arduino Mega (my replacement for the Polysix's "Key Assigner CPU") to properly route the velocity data from the keybed to the Velocity Processor.  While this routing of the velocity data sounds straight-forward, the need to support the Arpeggitor modes made it more challenging (note that the velocity-sensitive arpeggiator leads to fun effects, like being able to make some notes feel accented...definitely a cool effect).  In the end, the software writing went pretty smoothly.  My latest code for both the Arduino and the Teensy are on my GitHub here.

First Trials and Tweaking:  Once I got it all wired up and programmed, I started to play it.  The velocity sensitivity really makes it more expressive.  Velocity sensitivity also quickly exposes bad keyboard technique!  I need practice!  But, even with my poor technique, I felt that the velocity response wasn't quite right.  So, I spent some time remapping the velocity values to create a custom response curve.  Furthermore, to get a good electric piano/clav sound, I felt that I needed a little grit and compression in the sound.  So, I added a drive circuit, which will be the subject of another post.

Playing It:  Once I got it adjusted to my liking, I've had a lot of fun adjusting all of my traditional Polysix patches to best include the velocity capability.  I started with the piano and clav sounds (as seen at the top of this post) because they our ears most expect velocity dynamics with these kinds of sound.  Interestingly, though, even organ sounds (which are traditionally not velocity sensitive) can benefit from velocity dynamics.  Hitting the keys a little harder, gives the organ more "pop!".  You can here it this little carnie organ vamp:


Moving Forward:  My next step is to continue to refine the interaction of the velocity with the other synth's features.  For example, I'd like a way to turn off the velocity sensitivity so that the EG Int will work as it does in a stock Polysix.  To do this, I simply need to wire up a switch, or re-purpose one of the switches already on the back of the synth.  Also, I need to further tweak (and then write-up!) my drive circuit.  It is critical for the velocity-sensitive piano/clav sounds, but I've found fun uses with other sounds, too.  Finally, I also want to improve how the velocity interacts with the Unison and Chord Mem modes of the synth.  It doesn't feel quite right yet.  So there's lot's to do!  But first, I've got some playing to do.  :)

Update: I tried adding diode-based distortion to add some grit to my EP/clav sounds...but I didn't like it very mcuh.

Update: I tried overdriving one of the Polysix's OTAs to add some grit and I liked it a lot!