As discussed in my previous post, I have a dream of adding velocity sensitivity to my Korg Polysix.  My replacement keybed already generates the velocity data, I just have to figure out how to use the data.  My plan is to have the velocity affect the intensity of the envelope applied to the filter (VCF).  The harder I hit the key, the more of the envelope signal is applied to the VCF.  Should be easy, right?  Well, it turns out that the Polysix uses a lot of multiplexing to handle its polyphony, including its VCF control.  This post is about understanding the multiplexing so that I can adjust the envelopes based on note velocity.  Let's go! 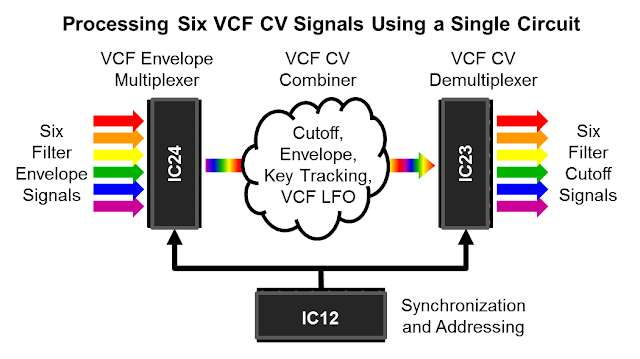 The Simplified View:  To figure out how the VCF envelope is applied to the VCF, I looked at the Polysix schematic.  Being a six-voice synth, one might expect that six individual circuits are used to apply six individual envelopes to six individual filters.  But this is not the case.  To save money, the designers used multiplexing so that a single circuit could be used to service all six voices.  When I look at the schematic, I do see that there are six circuits used to create the six envelopes.  But then, at IC24, I see that these six envelope signals are multiplexed into a single time-sliced signal.  The single multiplexed signal is then passed through a circuit that combines the envelopes with the VCF cutoff, the VCF key tracking, and the VCF LFO modulation.  At the end of the circuit, IC23 demultiplexes the time-sliced signal back into six individual control voltages that go off to the filter circuit for each voice.

The Detailed View:  With that overview, I have excerpted the real schematic below and highlighted the signal path specific to the VCF envelope.  As can be seen, the six envelope signals enter at the bottom left.  At IC24, they are multiplexed, at which point the time-sliced envelope signal follows the thin red line through the modulation circuit.  Finally, it ends up back at IC23, were it is demultiplexed back into six control signals for each voice's VCF.  Somewhere in this signal path,  we will make a modification to allow us to modify the VCF envelope based on the note velocity.  To decide where and how to make that modification, I need to better understand how the multiplexing works.


What Does the Multiplexed Signal Look Like?  I hooked up my oscilloscope to the multiplexed signal line shown in the schematic above.  I hit two keys on the keybed and saw what the multiplexed envelope signal looks like.  In the screenshot below, you can clearly see that two envelopes were triggered.  You can also see that the two envelope signals have been sliced up and interleaved.  This is what multiplexing does, it slices up multiple signals and interleaves them onto a single line.  Looks pretty straight-forward, eh?  Let's zoom in, just to be sure of the details.


Zoomed View:  The picture below is a zoomed in view of the multiplexed envelopes.  As can be seen, there is a repeating signal that contains two two non-zero voltages.  The first voltage value corresponds to the envelope for Voice #1 at a that specific moment in time.  The second voltage corresponds to the envelope for Voice #4 at its moment in time.  In the time between those two voltages, the voltage is zero because none of the other voices are active.  If the other voices were active (as shown later), there would be signal here.  Since the notes are off, there is no envelope, so there is no signal in that time slot.  Easy.  [As a side note, we see that the mutiplexed signal appears to have a cycle of ~310 microseconds, which means that each voice's envelope gets updated at a rate of 3.2 kHz.  I'm actually a bit surprised that it is that slow.  I expected faster.]

All Six Voices Active:  To further illustrate how the envelopes are multiplexed, the screenshot below shows the multiplexed signal when all six voices are active.  In this case, all of the envelopes were triggered at the same time (Unison mode!) so all of the envelopes are showing approximately the same (non-zero) value.  The critical detail here is that we see six period's worth of non-zero signal.  Those are the six voices.  Curiously, we also see two periods of zero signal.  These extra two slots ("slot 7-8") are, in my opinion, purely an artifact of how the addressing is done to keep the multiplexing and demultiplexing in sync with each other.


The Vision for Velocity Sensitivity:  Now that I see how the multiplexing works, I can also see how I can modify the envelope signal based on the velocity of each key press.  I think that I can work directly with the multiplexed signal.  In my illustration below, the left portion of the figure is the multiplexed envelope signal as created by the Polysix.  Each color represents the time slice that is associated with each of the six voices.  My idea is that I can introduce a new circuit -- my "Velocity Processor" -- which can attenuate the envelope signal for each voice, depending upon the velocity of the note assigned to that voice.  As long as my Velocity Processor responds fast enough to keep up with the multiplexing, it can affect each voice independently of the others.

Hardware Configuration:  I like this plan -- to simply modify the multiplexed envelope signal based on each notes velocity.  Looking back at the Polysix's hardware, it looks like the right place to introduce my Velocity Processor would be right after the IC24 Multiplexer, as illustrated in the simplified view below.  This location gives me access to the multiplexed envelope signal, but it is before the signal gets too complicated by the rest of the VCF CV processing, where the cutoff, key tracking, and LFO modulations are applied. 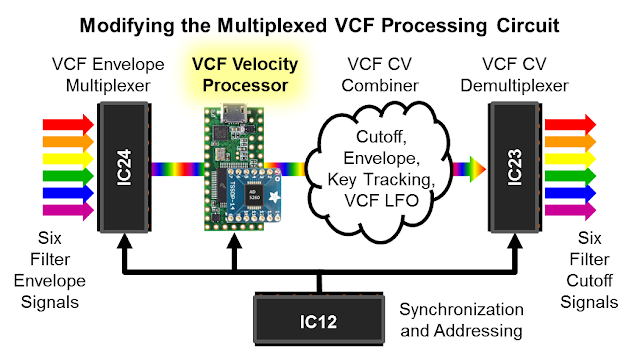 Next Step:  The key to this approach is that I want to independently modify each voice in the multiplexed signal stream.  This means that I need to know which voice is on the multiplexed line at each moment in time.  As a result, I really need to dig in and learn about the synchronization and addressing scheme used by the multiplexer.  Figuring this out will be the topic of my next post.

Update:  I figured out the addressing and timing of the multiplexing.  Check it out here.